A few days ago, I came across a tweet of Aaron Peterson that introduced a new gem made by Netflix: fast_jsonapi. I’ve worked with a few json rendering libraries over the years, and haven’t found anything that 100% satisfy my need, so I’m earger to take a look.

After a trying it on one of my pet project to replace AMS (which it claims to replace), I found that it is really simple to finish the task with the gem. If you have an AMS serializer:

You just need to remove ActiveModel::Serializer inheritance, and include FastJsonapi::ObjectSerializer instead. Now you have:

I looked at the dependencies of the gem, and see that it uses oj, which is nice. No wonder it has such good speed!

Its oj native support also means that you cannot use any others json rendering libraries, like json or yail. If you prefer those libraries for some reasons, you cannot use this gem as well.

Another quirk that I find a little uncomfortable with is that this gem treats the input differently based on its type. If the input is Enumerable (like Array or ActiveRecord::Relation), it works as collection serializer. Otherwise it work as object serializer. While it is not really that bad, there will be usecase that you don’t really want this feature.

I also miss a few features from other json libraries like custom element name, or specifying render or not render nil object, and a few other features. Of course, those will come with time, as there are a lot of PRs that are submitting to it recently.

The last one is: the claim is not really the truth. I see the benchmark that it’s multiple time faster than AMS and suprise. I had a similar benchmark a while ago, and while AMS is not the fastest, when it comes to render a complex dataset, it’s not really that bad. Therefore, I run my benchmark again with fast_jsonapi and see the result below: 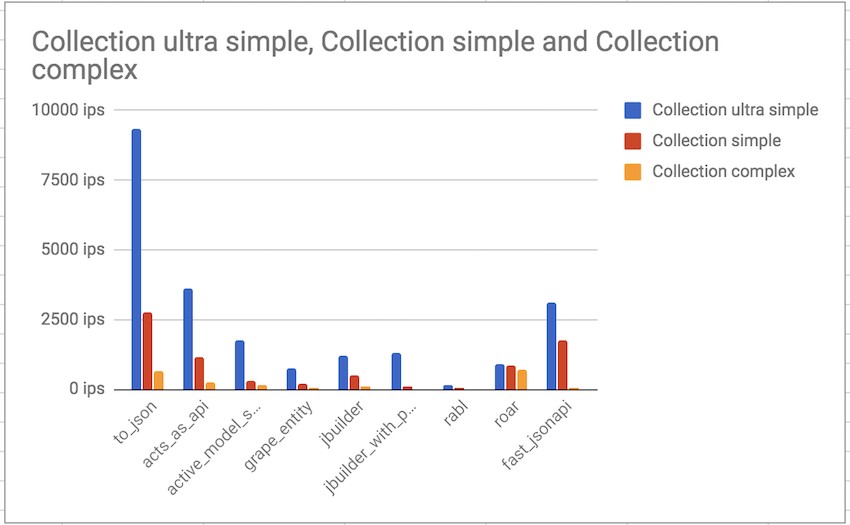 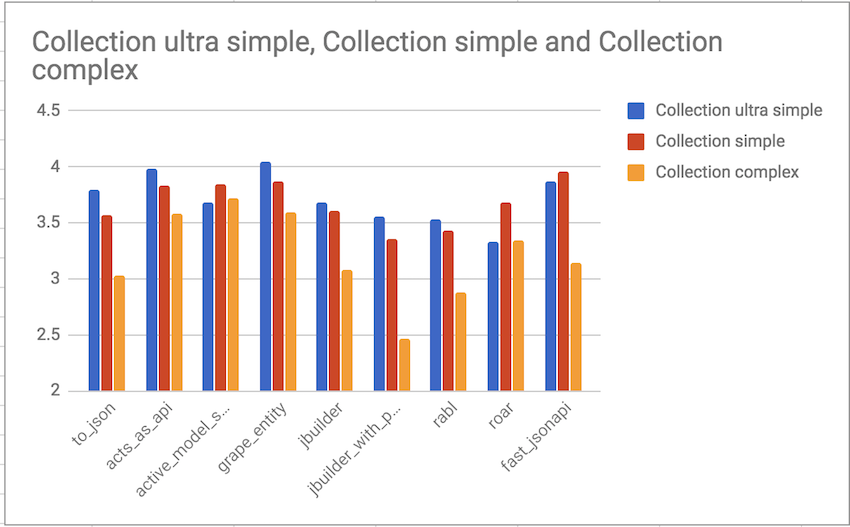 As you can see: for simple collection rendering, it’s quite fast, totally beating AMS and almost all other gems. However, for the most complex case, it fails miserably compared to AMS, Roar and Grape::Entity

To sum it up, while fast_jsonapi is a nice gem, it doesn’t add much to what we currently have, in term of usability or performance. Other mature gems such as Grape::Entity or Roar, with a lot more features and more consistent performance, may be a better choice for your application.

According to the author of the gem, the gem is focusing only on optimizing rendering json in jsonapi spec, that’s why it’s much more faster than AMS with json api adapter (which is significantly slower than default adapter).